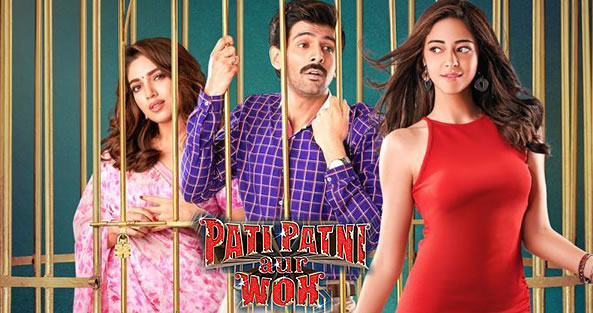 MOVIE RATING
Well-known filmmaker BR Chopra's 1978 release Pati Patni Aur Woh has achieved cult status. Now it’s remake which is the story of an extramarital affair in a middle-class household, this time set in the town of Kanpur.
About the film plot, Government employee Abhinav Tyagi aka Chintu (Aaryan) is smitten by Vedika (Pednekar) when their parents introduce them as a prospective match. Soon after, they tie the knot. The couple is living happily. Chintu Tyagi (Kartik) is an engineer working in PWD and his wife Vedika is a teacher. After three years of marriage Chintu starts getting bored of his dull life. Delhi-girl Tapasya reaches Kanpur looking for a plot to set up a workshop for her boutique. Then he meets Tapsya Singh, who adds a dash of excitement into his boring life. Chintu finds her too attractive to resist, but won’t cheat on his wife either. So, he finds an idea to spend time with the beautiful lady. In spite of getting numerous warnings from his best friend Fahim Rizvi (Khurana), Chintu starts an affair with Tapasya and what happens then forms the rest of the plot.
About the star cast, Kartik Aaryan has essayed Chintu and by now he has learnt the art of playing the middle-class family oriented characters. Her performance is enjoyable initially but repetitive. Overall, he entertains with his capable act. On the other side, Bhumi Pednekar has essayed Vedika and justifies her strong character by her efficient performance. Ananya Panday has played Tapasya Singh and does justice to the role of Tapasya, the big-city girl who catches the hero’s fancy. She is innocent without being ditzy. Aparshakti Khurrana has played hero’s best friend and his comic timing is enjoyable.
About the film, this film is really enjoyable. It is too slight and too simplistic to make any deep observations about marriage or camaraderie. The screenplay is good and it tickles your funny bone right till the end. Dialogues are funny and Kartik and Aparshakti’s bromance is the highlight of the movie. There’s no uniqueness in the story but Mudassar Aziz has added some sparkle to it with his capable direction. Cinematography is supportive for the tale.
Overall, film Pati Patni Aur Who is worthy to watch once for its entertaining quotients.