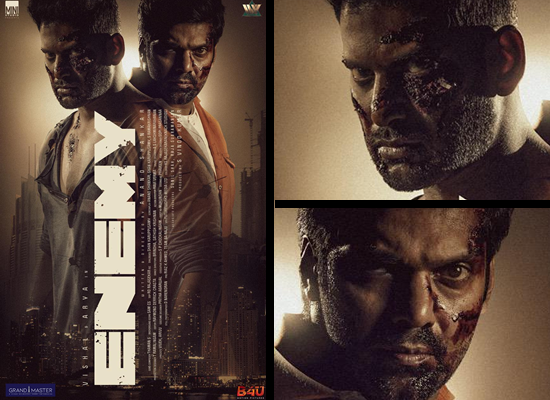 Finally, the teaser of the much-anticipated film 'Enemy' was officially unveiled by the makers. Sharing the teaser on his social media account, Arya wrote that he thoroughly enjoyed the fighting scenes in the film. “Loved fighting out with #Enemy @VishalKOfficial,” his tweet reads.
Going by the series of spectacular visuals, Vishal, a cop, is after the antagonist Arya who is playing the role of a prisoner. With a pulsating background score, the teaser suggests the story could be a crossword puzzle for audiences to crack.
Anand Shankar has directed the movie while Vinod Kumar bankrolled the project under the Mini Studios banner. Versatile actor Prakash Raj is playing a key role in this movie. ‘Gaddalakonda Ganesh’ fame Mrinalini Ravi and Mamata Mohandas are playing as female leads in this actioner.
Cinematographer RD Rajasekhar is the cinematographer handling the camera while the latest music sensation Thaman is composing the music. Along with Telugu and Tamil, ‘Enemy’ will be released in Hindi too by B4U Motion Pictures. The makers are aiming for a September theatrical release.