SRK comes to balcony of Mannat for greeting fans ahead of 'Pathaan' release! Mon January 23rd, 2023 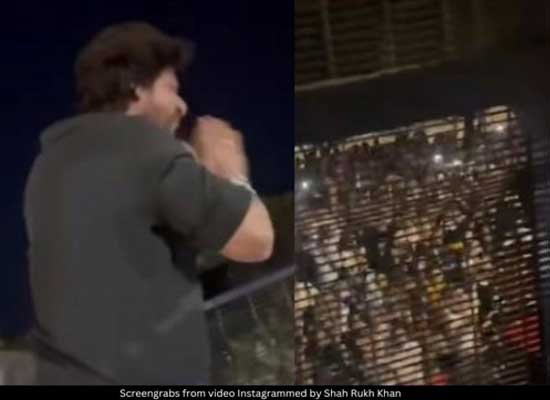 'Pathaan' release is just around the corner and to build the hype for the flick, Shah Rukh Khan has been doing his best to engage with his fans. The 'Chak de India' actor has done several #AskSRK sessions on Twitter ahead of the release, and in a latest, SRK came out to the balcony of his home 'Mannat' to greet the fans. Once the actor started waving to his fans, traffic at Mumbai's Bandstand came to an absolute standstill.
The actor posted the video on Instagram and he captioned the post as: "Thank you for a lovely Sunday evening… sorry but I hope ki laal gaadi waalon ne apni kursi ki peti baandh li thhi. Book your tickets to #Pathaan and I will see you there next…”
He also exhorted his fans to book tickets for Pathaan.
'Pathaan' is SRK's first full-length feature film after a gap of more than four years. The advance booking for 'Pathaan' started on January 20 and the tickets for the opening day are selling like hot cakes.
The movie is expected to register the highest box-office collection for an Hindi film in the pandemic era, beating the record of 'Brahmastra: Part One Shiva'.
'Pathaan' marks SRK’s return to the big screen after four long years.
Click here for full story…