Kartik Aaryan to share a pic of Kiara Advani holding the clap board of Bhool Bhulaiyaa 2! Wed October 09th, 2019 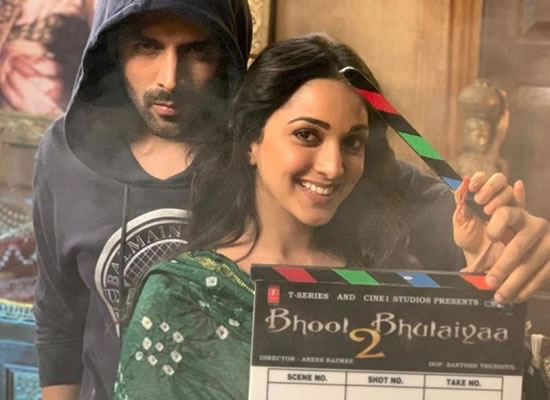 A much awaited sequel of Akshay Kumar's horror Bhool Bhulaiyaa, Kartik Aaryan and Kiara Advani are headlining Bhool Bhulaiyaa 2 that is going to be helmed by Anees Bazmee. Earlier, reports of Kartik and Kiara starrer going on floors soon were coming. Recently, but, Kartik shared the first photograph from the sets of the horror comedy sequel and officially began the shoot of the movie.
Kartik took to social media to share a photograph in which he is seen standing behind Kiara. Kiara can be seen holding the clapboard of the mahurat shot. In the photograph, Kartik is seen sporting a hoodie, while Kiara can be seen clad in traditional dress. Bhool Bhulaiyaa 2 is scheduled to release on July 31, 2020.