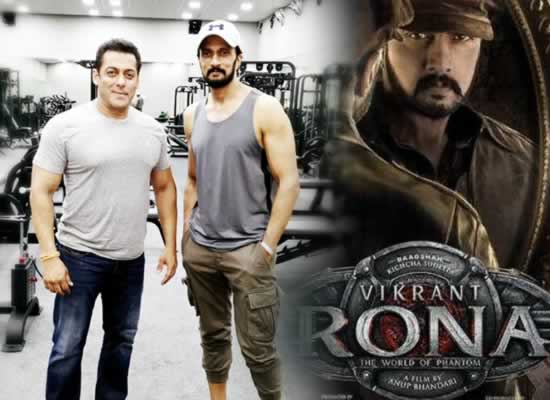 Superstar Salman tries to support Indian artists by promoting the work of actors and artists from different entertainment industries.
Recently, the Ready star shared the Hindi trailer of Kichcha Sudeep’s adventure drama Vikrant Rona, which sees a 28th July 2022 release. As a distributor of the movie, Salman Khan didn’t just like the project but also, he has decided to distribute Kichcha’s film in Hindi, through his banner Salman Khan Films. The Makkhi (Eega) star was humbled by the support he got from one of India’s most bankable stars. Apart from Salman Khan, Ram Charan, Dulquer Salmaan, and Dhanush too came up in support of Kichcha and shared the trailer in Telugu, Malayalam, and Tamil respectively. Vikrant Rona is releasing in 6 different languages that are Kannada, Hindi, English, Telugu, Malayalam, and Tamil, which proves how ambitious the makers are about this film.
On the film front, Salman Khan will next be seen in Kabhi Eid Kabhi Diwali with Farhad Samji which is expected to release in the last week of 2022.