Ryan Reynolds opens up about voting for 1st time in the US! Fri October 23rd, 2020 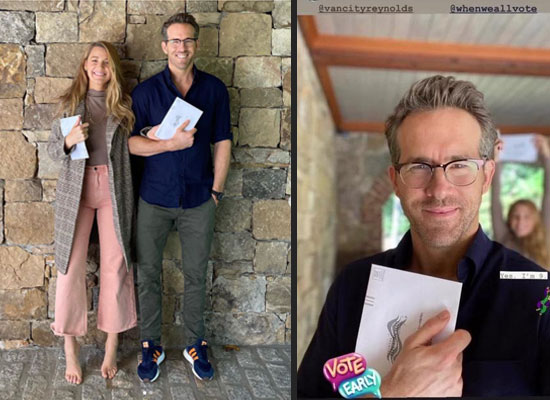 Hollywood biggies Ryan Reynolds and Blake Lively shared their excitement about voting.
Recently, the couple posed with their election ballots, happy that they voted. For Reynolds, it was his first time voting in America as the pair shared the same photograph on IG. However, admirers instantly noticed a major difference in both photos. While in Ryan's IG post, Blake poses barefoot, Lively's IG post sees the 33-year-old in doodled brown Christian Louboutin heels. Instantly, the Gossip Girl alum's feet became viral and a meme-worthy trending topic.
Blake's caption reads as, "It was Ryan’s first time. He was understandably scared. It all happened so fast. Like, REALLY fast. He wept. I pretended to weep. Then he called all his friend. #voteearly"
Ryan's caption reads as, "This is my first time voting in America. I’d like to thank my wife Blake for making my first time so gentle and loving. It was super scary at first, then exciting and now I’m a little tired. But proud. #VoteEarly"