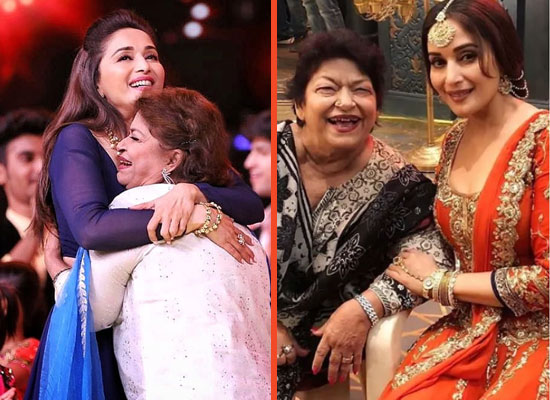 After a sad demise of legendary choreographer Saroj Khan, Madhuri Dixit penned an emotional note on the occasions of Guru Purnima. Madhuri remembered several unforgettable moments with Saroj from her initial days, including the time they first met to the song where they created the hook step together.
"I still can’t believe master ji is no more. Losing a friend, philosopher & guide like her is devastating. It was difficult for me to put down my grief in words. I had spoken to her daughter when she was in the hospital & she told me that Saroj ji would be fine. Two days later, she was gone," her post starts off. "The Guru-shishya bond that we shared, the assurance that she would be my mother on the sets, I'll miss everything. Today on the occasion of Guru Purnima, I pay my tribute to her," she added.
"Nobody can make women look so beautiful, desirable & sensuous on-screen like her. She made everything look like poetry in motion," Madhuri wrote. "Saroj Khan was a game changer in the industry. She was the rebel in the male-dominated profession. There were rough edges to her personality & I feel that's because life has been pretty uneven to her," she further added.
"Saroj ji taught me how to romance the camera when we worked on Ek Do Teen," Madhuri disclosed. Talking about Tamma Tamma's hook step, Madhuri further added, "Her Nazakat, the aadayein, the elegance of every move, I was besotted. I knew we would do a lot of songs together. So we decided not to repeat any of the movements. She agreed to create hook steps that people will identify with every song. We created so many movements with no knowledge about what they are called. Who knew Tamma Tamma step was Dab? I'lll miss inventing hook steps with her."
"She was close to my family as well & this loss is deeply personal. There's no one like her & there won't be another like her. Saroj ji, I'll miss everything about you. I'll miss your 'Perrrfect'!" she ended her post.