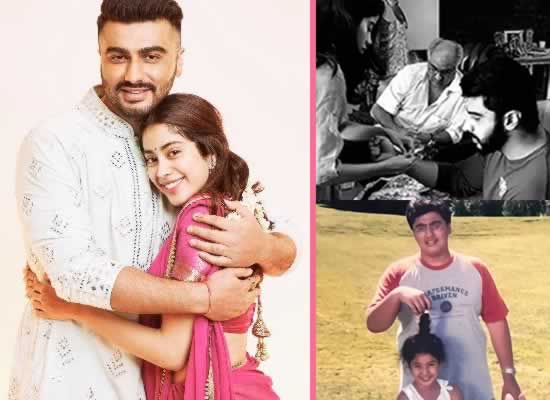 Bollywood actress Janhvi Kapoor is one of the most glamorous actresses in Bollywood. The Dhadak actress has often talked about her bond with Arjun Kapoor. For the information, Arjun and his sister, Anshula Kapoor are producer Boney Kapoor's children from his first marriage with Mona Shourie. While Janhvi and Khushi Kapoor are Boney and late actress Sridevi's daughters, whom he married in 1996. It was after Sridevi's unfortunate death in 2018 that the relationship between Arjun and his half-sisters Janhvi and Khushi evolved.
Ahead of Raksha Bandhan 2022, Janhvi recalled about her most memorable celebration with Arjun and revealed that the first time when she tied the rakhi to Arjun, was definitely the most memorable Rakshabandhan for her and though it was not too long ago, it was special. Further, the Roohi actress talked about her equation with Arjun and said that there is no such thing as an ideal relationship. "If there is a sense of trust, security, and understanding, these things can mean different things to different people, and that relationship is as close to being an ideal one. I have all of these in a modern, new and alternate capacity with Arjun bhaiyya. I look up to him for the man he is. What I share with him is a special relationship. I am just lucky to have him in my life," Janhvi revealed.
Janhvi revealed that the sense of security and warmth that she gets from her siblings has made her stronger as a person and she has felt it with every passing year. The actress revealed that now she sleeps better knowing that I have two such solid people (Arjun and Anshula) looking out for her. She hopes that they also feel the same for her and know that she would do anything for them.