Aditi Rao Hydari opens up on being a Mani Ratnam heroine! Mon May 23rd, 2022 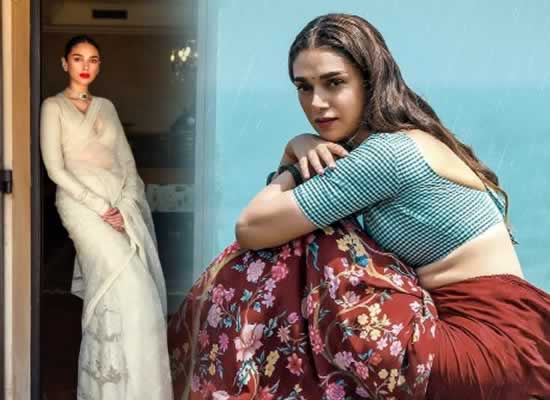 Recently, Aditi Rao Hydari has made her debut at the 75th Cannes Film Festival representing a global smartphone brand. But she not only walked the red carpet, but also opened up about her experiences as an actor.
In a media chat Aditi Rao Hydari revealed about making authentic mistakes. Talking about representing India, Aditi revealed, "When you come to a place like Cannes, then it’s a huge responsibility. Your whole country is watching you. But I feel all the more it is so important to be yourself. I want my mistakes to be authentic mistakes so that I can live with them. I don’t want to do silly things just because somebody puts pressure on me."
The actress also talked about her career as an actor and why she always aspired to become a Mani Ratnam heroine. "While growing up, I watched so many Mani Ratnam films, and I wanted to be a Mani Ratnam heroine. Mani sir is my favourite. I will work with him a million times… He really made me believe that dreams do come true. He is like a mentor, a parent to me. He might feel that I have not learnt anything, but I have learned a lot by just being around him. I also feel as an actor, it is so important to be a five-year old on set," Aditi revealed.
The actress further added that language holds no barrier in enjoying movies. She also went on to disclose that she had a "meltdown" when one of her movies was set to release on a streaming platform instead of the cinemas. The actress was referring to her Malayalam film Sufiyum Sujatayum.
Recalling, Aditi revealed, "It was a very special Malayalam film and I was playing a mute girl. I was so excited for its theatrical release. I wept loudly. They (the makers) took my view into consideration, but I realised that I can’t put producers under stress. Then I saw the magic of OTT. I was getting messages from everywhere, and I realised that the medium is not important."