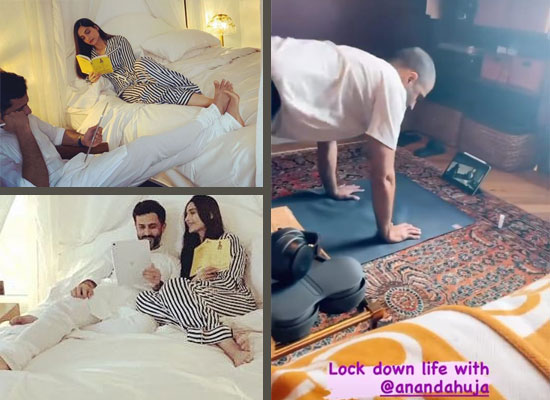 Presently, Bollywood’s leggy star Sonam Kapoor is in London with her hubby Anand Ahuja. Nowadays, she has been on the photo-sharing spree on her Instagram. Earlier, the actress had shared a throwback picture with sister Rhea Kapoor telling she is missing chilling out with her.
In the latest post, Sonam has given a glimpse of her lockdown life with her hubby Anand. She posted a couple of videos that show that their lockdown life is all about chilling and working out. The fashionista posted a video wherein she was lying down and capturing Anand who was seen working out. The post was captioned as, “Lockdown life with @anandahuja.” The Khoobsurat star dropped another video showing her having a fun banter with her hubby. The couple can be seen laughing off as they indulge in some humour. While Sonam can be seen relaxing on a bed, Anand was seen busy with his phone in the video.
On the work front, the Veere Di Wedding star was last seen in Netflix's comedy-thriller AK vs AK. The film was directed by Vikramaditya Motwane and also starred Anil Kapoor, Anurag Kashyap among others. She is currently awaiting the release of her film Blind. Directed by Shome Makhija, the film has been bankrolled by Sujoy Ghosh. It also stars Purab Kohli, Vinay Pathak, and Lillete Dubey in prominent roles.