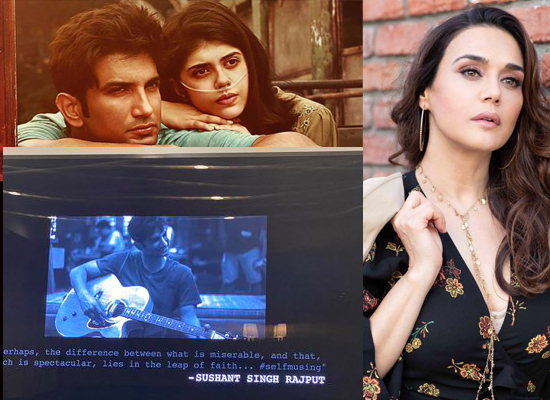 Recently, Sushant Singh Rajput starrer Dil Bechara was released on Disney+ Hotstar. Within 24 hours of its release, the movie was watched by 95 million viewers and registered a record-breaking viewership. The late actor Sushant Singh Rajput died by suicide on 14th June and is missed dearly by his family, friends, and fans.
Recently, Preity Zinta took to her social media account revealing that she is viewing the movie yet again and thanked director Mukesh Chhabra for doing full justice to the late actor’s last film.
Taking to her Twitter account, Preity uploaded two photographs. One, a still from the film and the other a screenshot from the film displaying Sushant’s quote. Along with the photographs she wrote, “Saw #Dilbechara again Thank you  @CastingChhabra for doing full justice to Sushant’s last movie It was surreal, a tearjerker & an emotional roller coaster all the way. @sanjanasanghi96 U & the rest of the cast did a fab job Congratulations to all of you. #Bittersweet #MissU."