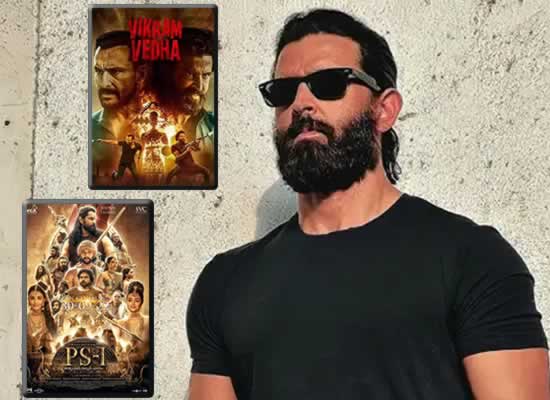 Bollywood's powerful Jodi Hrithik Roshan and Saif Ali Khan starrer thriller drama Vikram Vedha, directed by Pushkar and Gayatri, releases in theatres today on 30th September, 2022. Presently, the film is locking horns with a pan-India mega film, Mani Ratnam's Ponniyin Selvan 1, which is based on the first of the six chapters of the classic Tamil novel, Ponniyin Selvan. The makers of Vikram Vedha were questioned about their expectations from their movie as it clashes with a mega film like Ponniyin Selvan.
Film Vikram Vedha’s directors Pushkar and Gayatri made it clear that they didn't see Vikram Vedha and Ponniyin Selvan's clash as a box office battle. At a press conference, Pushkar revealed, “Ponniyin Selvan is a classic text, a tale of intrigue set during the Chola Empire. You can’t beat that. It’s a six-volume book that I read back in the day. That text has been an inspiration for every writer coming out of Chennai. We do our part and they have done theirs. Let’s hope people go and watch both the movies, like Friday-Saturday, Saturday-Sunday, first weekend-second weekend. I’ll be going and watching that movie for sure.” Hrithik Roshan said that he has not read the classic Tamil novel and thus, he would just be paying attention to his movie. Saif Ali Khan also requested the viewers to watch both the films.
Vikram Vedha is an official remake of the tamil movie of the same name, starring R Madhavan and Vijay Sethupathi and directed by Pushkar and Gayatri.