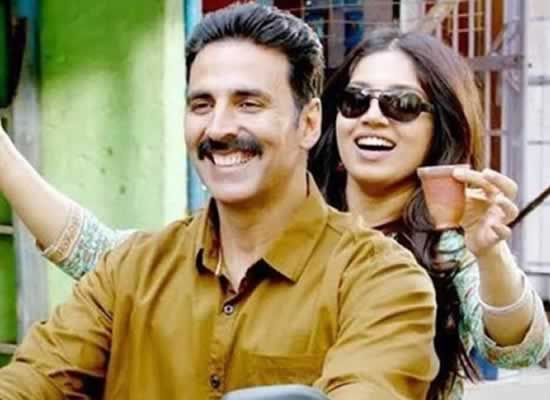 Akshay Kumar is readying for the release of his forthcoming movie Raksha Bandhan and is presently involved in the promotions. Helmed by Aanand L Rai, the movie also stars Bhumi Pednekar, alongside Sahejmeen Kaur, Deepika Khanna, Smrithi Srikanth, and Sadia Khateeb, who play Akshay Kumar’s on-screen sisters. While the movie revolves around the unconditional bond between a brother and his sisters, it also showcases a love story. Bhumi essays Akshay's interest in the film. In the meantime, the Entertainment actor on Tuesday penned an appreciation note for his Raksha Bandhan co-star Bhumi Pednekar.
In his post, Akshay stated that his respect for Bhumi has increased as she agreed to do a movie where there is no particular central female lead and is majorly about the sisters. The actor admired the work of the Toilet: Ek Prem Katha actress by stating that only a 'secure actor' could take up such a role, when the focus was on the sisters. Sharing the emotional post on his Instagram handle, the Dhadkan star posted, “Starry tantrums, what starry tantrums? Yahaan khud hi fan ban na padta hai… Jokes aside, this is an appreciation post for my friend and co-star @bhumipednekar, to agree to do a film which is titled #RakshaBandhan and features 4 sisters. It speaks volumes about her security as an actor. Watch our story unfold in 2 days. Book your tickets now.”
Raksha Bandhan is the second film of Akshay and Bhumi after Toilet: Ek Prem Katha.