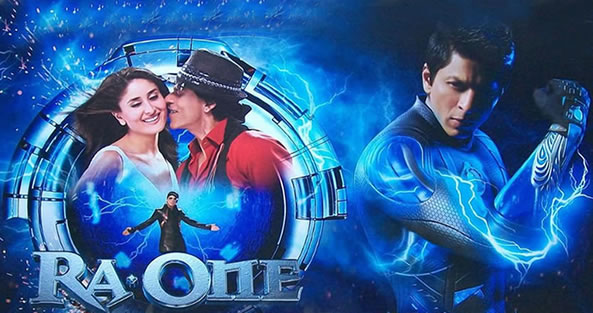 Synopsis: Jenny Nair (Shahana Goswami), an employee of London-based company Barron Industries, introduces a new technology that allows objects from the digital world to enter the real world using the wireless transmissions from multiple devices. Shekhar Subramanium (Shah Rukh Khan), a game designer who also works at Barron Industries, has delivered a number of commercial failures; an irate Barron (Dalip Tahil) gives him his last chance to develop a successful game. To impress his sceptical son Prateek (Armaan Verma), and upon the request of his wife Sonia (Kareena Kapoor), Shekhar uses his son's idea that the antagonist should be more powerful than the protagonist. His colleague, computer programmer Jenny uses Shekhar's face as a model for that of the game's protagonist G.One (Shah Rukh Khan) (Technically Good One and in Hindi Jeevan, which means life), while the shape-shifting antagonist Ra.One (Technically Random Access Version One and in Hindi Ravan, a mythical demon)[5] is made faceless. Another colleague, her boyfriend, Aakaashi (Tom Wu), implements the characters' movements. The game, named Ra.One, contains three levels, the final level being the only one in which either character can be killed. Each character possesses a special device – the H.A.R.T (Hertz Amplifying Resonance Transmitter) which gives them their powers. Upon reaching the last level, the characters gain a gun with one bullet; the other character can be killed by this bullet but only if his H.A.R.T is attached.
When Ra.One undergoes final tests, Aakaashi notices unusual glitches but chooses to ignore them. When the game is officially launched, it receives a standing ovation from the audience; an enamored Prateek insists on playing it immediately. He logs in under the ID Lucifer and proceeds to the second level, but is interrupted by Aakaashi. Ra.One, unable to end his turn with Lucifer and angry that a player has proceeded so far, becomes determined that Lucifer will die. He uses a wireless technology (which Jenny had introduced in a conference) to enter the real world, a process which causes the mainframe to malfunction. Aakaashi informs Shekhar, who partially understands the situation and rushes home, fearing for his son's life. Aakaashi is murdered by Ra.One meanwhile, and Ra.One assumes his appearance; he goes to find Lucifer, and meets Shekhar in the process. In an attempt to save his son, Shekhar claims that he is Lucifer, but his lie is exposed when Ra.One scans his identity card. Consequently, Ra.One kills Shekhar and makes it look like a car accident.
Sonia, devastated after Shekhar's death, tells Prateek that the family will return to India after Shekhar's funeral. A suspicious Prateek notices digital patterns on the fateful road and realises that Ra.One has come to life. He convinces Jenny of the same when they see the destroyed game laboratory, and the latter tries to bring G.One into the real world. Having killed Aakaashi's mother viciously in Aakaashi's guise at her house which he has accepted to mask his intentions, Ra.One chases Prateek and Sonia on their way to the airport, but G.One enters the real world and causes a gas explosion which temporarily destroys Ra.One. G.One takes Ra.One's H.A.R.T. and accompanies the family to Mumbai after Sonia realises that she needs him.
Subsequently, Ra.One returns to life, takes the form of a billboard model (Arjun Rampal), and tracks down G.One to Prateek's birthday party. Hypnotising Sonia, he assumes her form (having previously impersonated Aakaashi) to kidnap Prateek. Ra.One then instructs G.One to give him his H.A.R.T. back, and sends the real Sonia in a malfunctioning local train. The train crashes into the Chatrapati Shivaji Terminus, but G.One saves Sonia and others in time. To save Prateek, he returns to the virtual world and fights Ra.One; both reach the third level, the former left with little power. G.One tricks Ra.One into shooting him without his H.A.R.T. attached, leaving Ra.One helpless; furious, the latter creates ten copies of himself. Prateek, unable to identify the real Ra.One, asks G.One to quote Shekhar: "If you join the forces of evil, its shadows shall always follow you". The duo realise that only one of the ten Ra.Ones has a shadow: the original one. G.One shoots and destroys him, absorbs Ra.One's remains and disappears.
Six months later, Prateek and Sonia return to London, where the former manages to restore G.One to the real world.

An alcoholic professor is sent to a juvenile school, where he clashes with a gangster,.. more...
Home / Movies /Ra.One