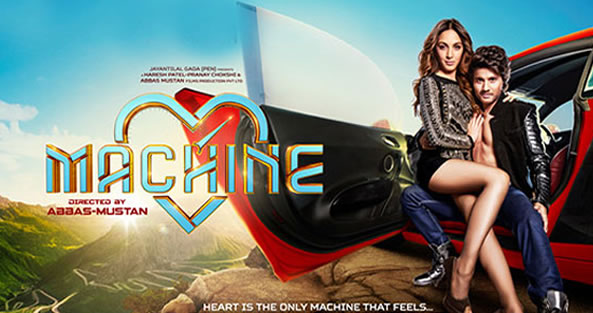 Synopsis: Machine depicts the story of racing enthusiasts Sarah (Kiara Advani) daughter of very rich businessman Balraj Thapar (Ronit Roy) and Ransh (Mustafa Burmawalla), who meet each other due to circumstances. Sarah is beaten by Ransh at a car race event, Sarah later finds out Ransh; new in town, is her new classmate. As their bond becomes stronger, they eventually fall in love and after the accidental death of her friend/secret lover Aditya (Eshan Shanker) their common friend, they get married. However, Ransh deceived Sarah as he is told to and kills her for her money and property by throwing her off a cliff. She is eventually saved by her college lover Aditya's twin brother Raj (Eshan Shanker) who is a Commando in the Indian Army. Then Sarah and Raj come to know the exact reason about her killing when they find out Ransh was doing all this on someone's orders and he is duping another rich businessman's daughter. They trace him and find that her own father had planned all these due to a very convoluted reason. He is not Sarah's biological father and they come to know that he only raised her as his own daughter for her wealth. He even kills Sarah's parents by planning it like an accident. When he was about to pull his gun to shoot her, Sarah shoots him and burns him alive with all the money he looted so far by shooting the main power socket. They both eventually take revenge from Ransh and he dies in the end committing his true love for Sarah leaving Sarah sad.

Rohan Bhatnagar (Hrithik Roshan) is a kind, happy young man who has been blind since.. more...

Film is set in the backdrop of Money, Power & Business. largely based on the Stock market. more...
Home / Movies /Machine